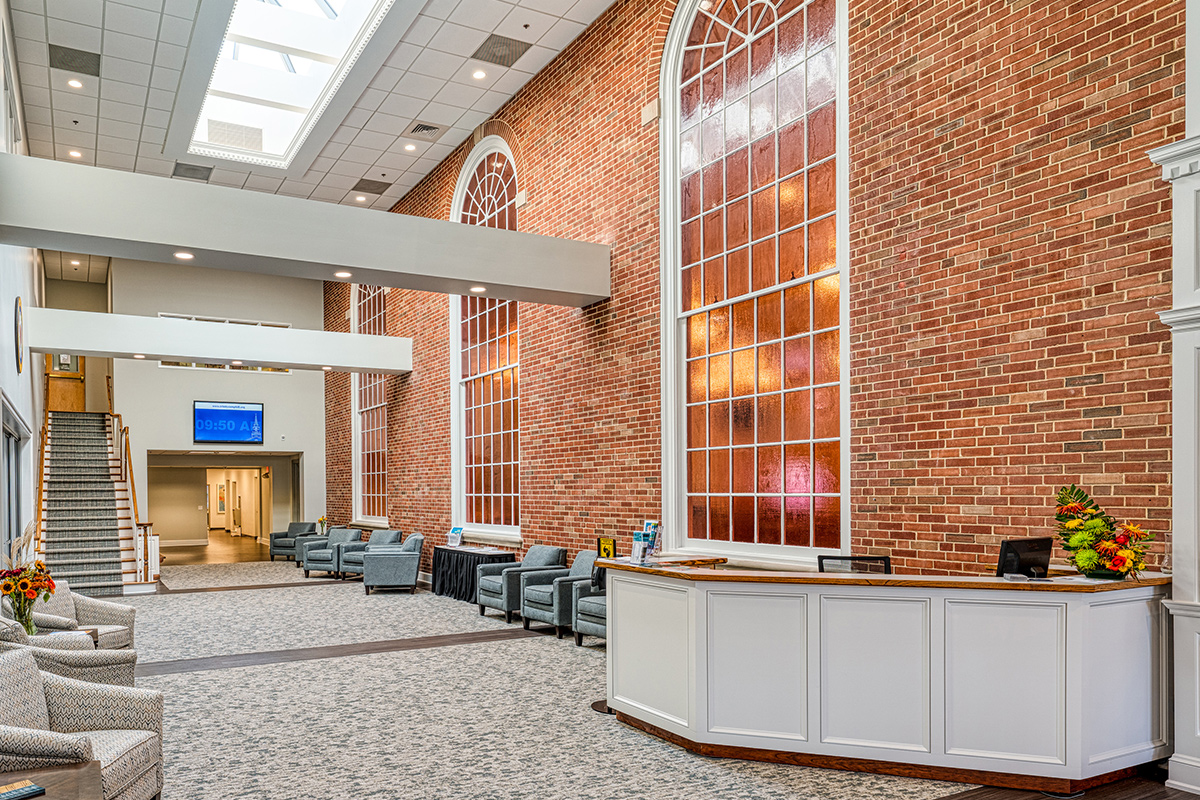 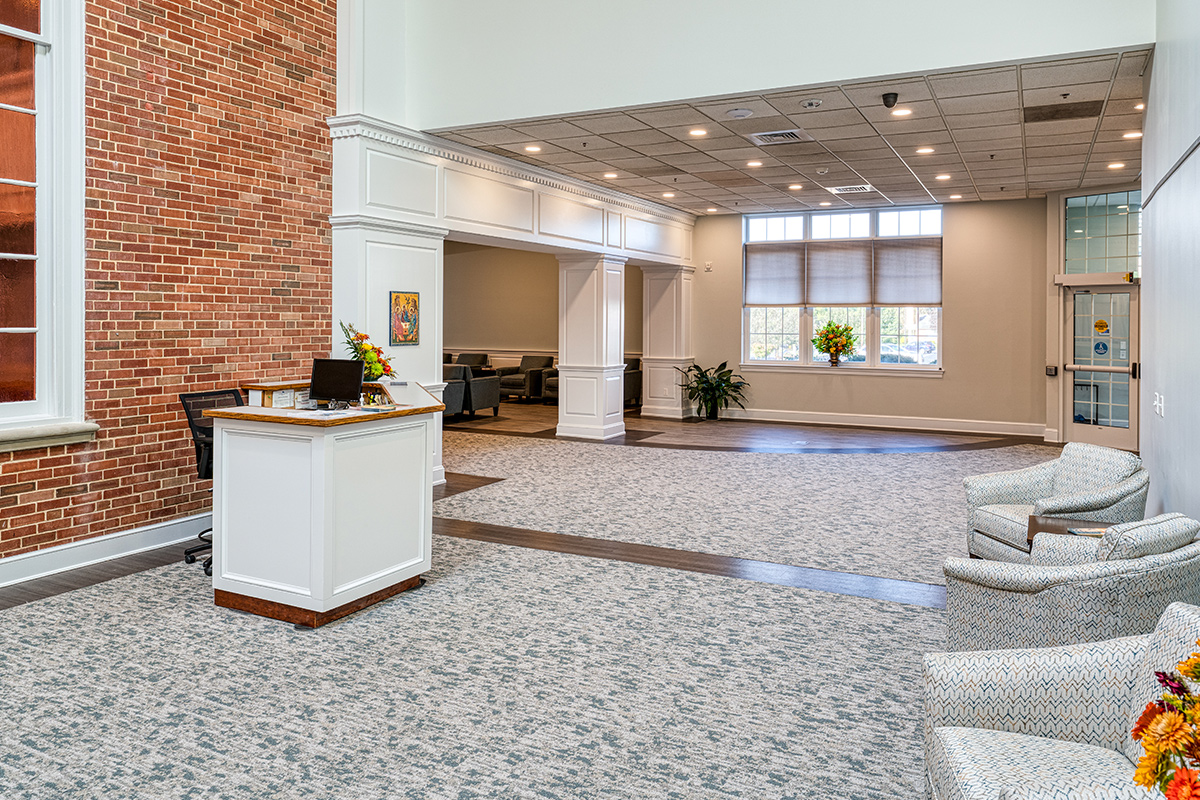 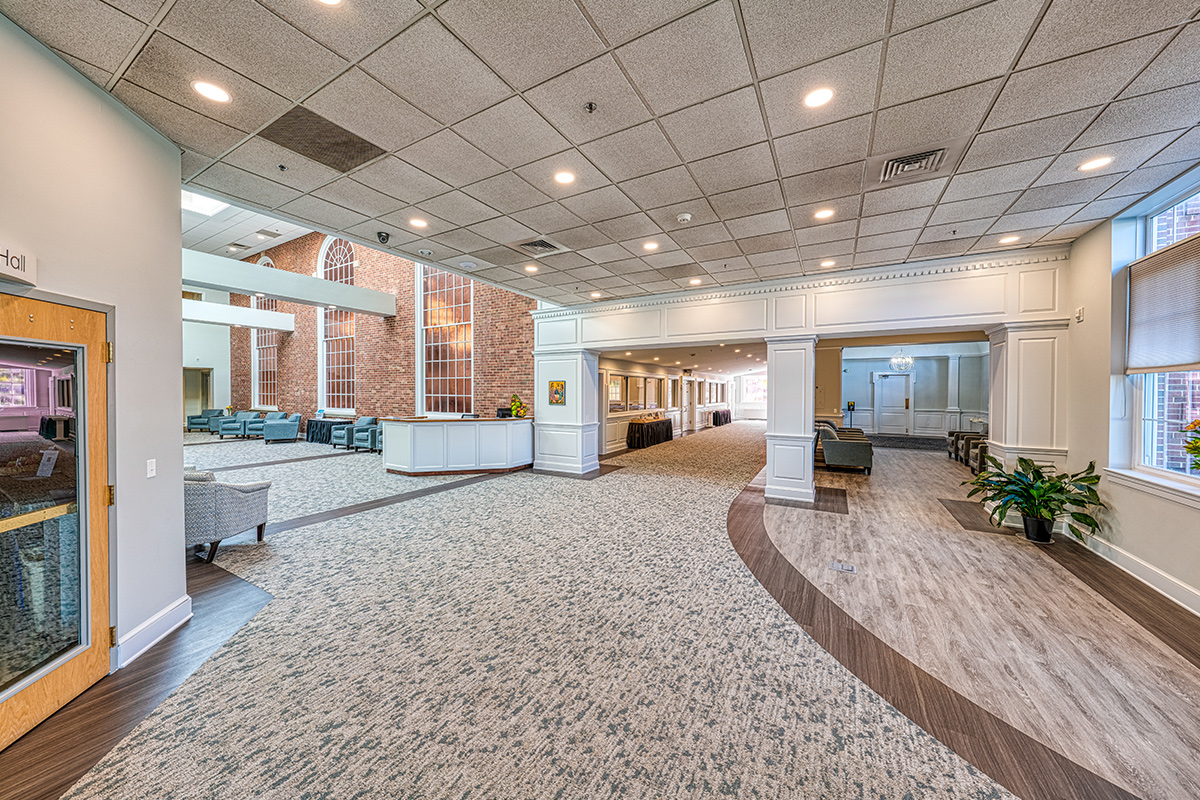 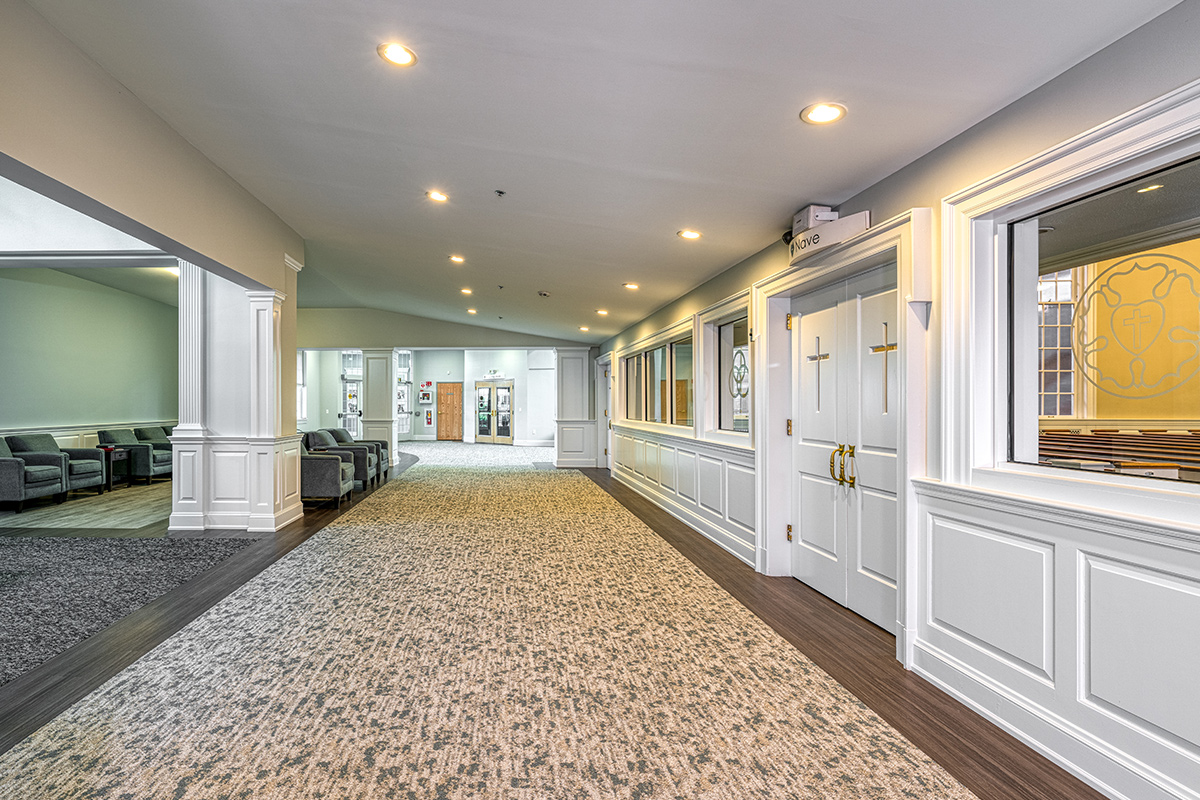 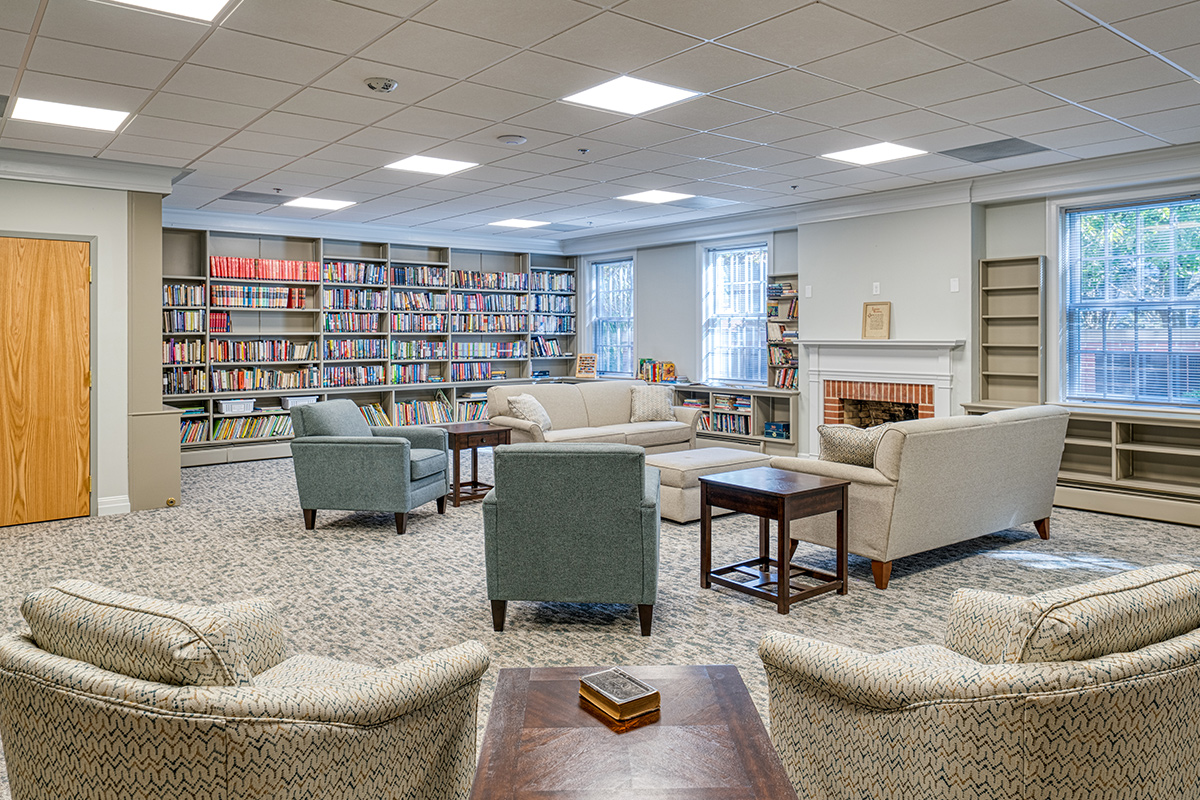 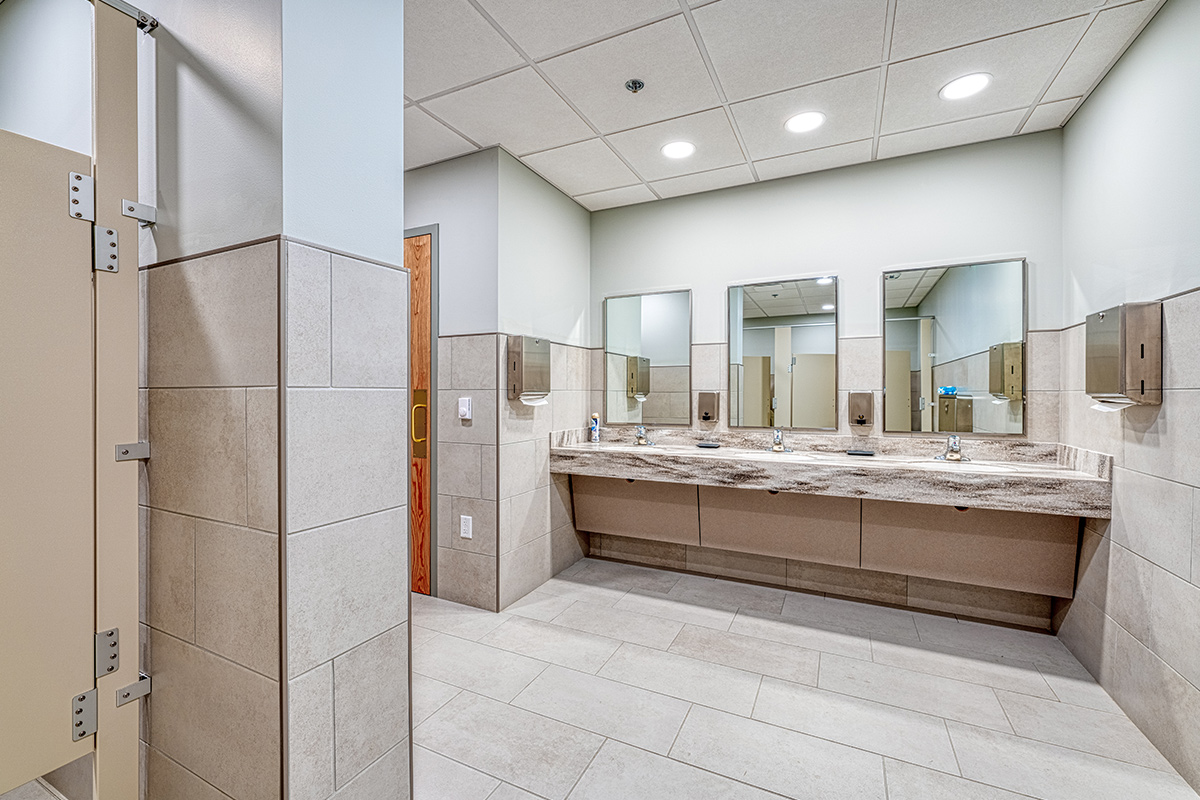 As Trinity Camp Hill re-opened their doors after the pandemic, the congregation was also greeted by the most recent renovations to their important historic Evangelical Lutheran Church.

With the main intention to create a “more open and welcoming” feel for new guests, Beers + Hoffman Architecture designed the removal of a wall separating the main lobby from the former sanctuary narthex while maintaining and replicating traditional wood panel and trim details. The wall between the main sanctuary and narthex was also modified to allow for more visual access into the space from the narthex through the use of glass panels and traditional wood trim detailing installed at the rear of the traditional sanctuary. The easier movement between spaces is immediately obvious and is accented by the connection of natural daylight throughout this area.

Next, the main gathering space connecting the traditional service space with the contemporary worship space was refreshed with new finishes consisting of materials, textures and colors from nature. Of note, these replaced finishes that were part of the original construction of this lobby in 2000-2001 were selected at that time by Diversified Design, now a part of Beers + Hoffman. The main gathering space was also improved to include a vestibule providing both an airlock to the exterior and improving security to the building during its daily use.

The project also renovated the restroom locations to expand and include ADA accessibility features while the existing first floor library was renovated to also include an accessible rest room. This renovation allows the space to serve multiple functions including a nursery area during worship services with its proximity to the sanctuaries, a bride’s room, reception room for families during viewings as well as a small group meeting room throughout the week. The second floor included opening an area near the sanctuary to create better access and exiting from the mezzanine. And, last year, additional doors, security hardware and sprinklers were added to the children’s classrooms on this floor.

All of these renovations were the first part of a master plan that Beers + Hoffman Architecture began developing with the church in 2016. Safety, security, and accessibility improvement are the key elements of this plan. This set of renovations marks a major step in the journey of this congregation as it looks to its future and welcomes the surrounding community into its facility.